Polyunsaturated Fatty Acids (PUFA): Why You Should Avoid Them and How Mainstream Nutrition Got it Wrong

The role of fat in modern nutrition is one of the most debated and confusing topics among health professionals and nutrition experts. In some ways, fat has a very negative connotation. Among the general public, dietary fat is associated with body fat, serum cholesterol levels (which are generally thought of as bad), as well as “artery-clogging” plaque, specifically in the coronary arteries (the arteries of the heart). In the 1990s, the low-fat craze hit America; however, we found that as we tried to reduce our total fat consumption, during this time, rates of obesity and heart disease actually increased. Most now agree that the story is more complicated than looking at the total fat and the type of fat clearly plays an important role in health. For example, research done in the 1990s clearly showed the adverse health effects of “trans” fats, which are fats in which hydrogen atoms are added to liquid vegetable oils to make them more solid. However, besides the trans fats, the issue of whether saturated vs unsaturated fats are healthy is under debate. Mainstream nutrition says that saturated fat is the “artery-clogging” fat and is bad, whereas unsaturated fat is healthy and some types of unsaturated fat are actually essential, which are known as Essential Fatty Acids (EFAs). This article serves to elucidate some of the historical context and economic incentives of why this theory came to be and outlines some of the medical literature showing specifically that polyunsaturated fatty acids (PUFA) is not only not essential, but actually harmful to human health.

History of the “Essentiality” Of Polyunsaturated Fatty Acids

The history of the so-called EFAs or “Essential” Fatty Acids begins in 1929 with a paper written by George and Mildred Burr (see A New Deficiency Disease Produced by the Ridid Exclusion of Fat From the Diet and On the Nature and Role of the Fatty Acids Essential in Nutrition). Burr described a condition of the experimental rats fed a zero fat diet, in which the rats had dry/scaly skin, inflammation/swelling of the tail, skin lesions, dandruff, hair loss, slowed growth, sterility, and eventually tissue necrosis of the distal end of the tail. However, several publications in the 1930s and 1940s showed that Burr’s basic animal diet was deficient in various vitamins and minerals, particularly Vitamin B6 and that these same animals could be cured by adding back these nutrients.

In the first half of the twentieth century, the seed oil industry saw doubling of US seed oil consumption every decade since the first world war until around 1960 and became a highly profitable industry. However, at that time, seed oils in paint and plastics began to become replaced with petroleum derivatives and the industry fell into crisis. In response, the industry decided to move these seeds oils into the food market. The industry claimed that these oils were healthy and the unsaturated fats were actually “essential” citing the 1929 work of Burr, despite clear evidence that this was not the case.

Farmers began to use soy and corn oil to feed their livestock and found that this practice made the animals significantly fatter. The decrease in metabolic rate induced by adding significant PUFA to the diet, allowed the animals to become fatter on less food, which translated to increased profits for them.

In the 1980s, the oil industry became more sophisticated and began publishing experiments in which fish oils were compared to the more toxic seed oils (safflower oil, sunflower oil, corn oil, etc) and showed that animals’ health was significantly better. In addition to making the fish oils look good by comparison to the stronger toxins, they also took advantage of the immunosuppressive property of these fish oils, emphasizing their ability to temporarily help in immunological or auto-immune diseases. The introduction of the cholesterol hypothesis into mainstream health and the finding that PUFA reduces serum cholesterol also helped continue the narrative.

Because of the effect of industry on the food supply, the amount of PUFA in the American diet increased significantly over the course of the 20th century. 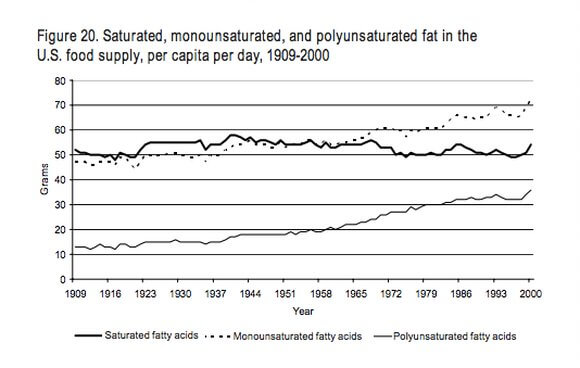 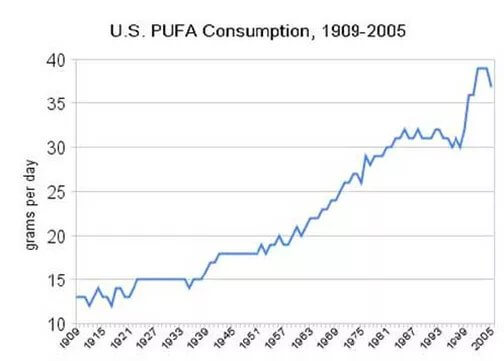 Part of the confusion surrounding fats is that there is a lot of medical literature showing that unsaturated fats are anti-inflammatory, lower LDL cholesterol and reduce overall cardiovascular risk. This part of the story is true (see Omega-3 fatty acids and cardiovascular disease: effects on risk factors, molecular pathways, and clinical events). However, just looking at inflammation and even cardiovascular outcomes may be a narrow perspective. For example, statin medications (such as Lipitor) reduce cholesterol and cardiovascular risk, does that mean they are healthy? Additionally, cortisol has a potent anti-inflammatory effect (for example, you may have heard of cortisone joint injections); however, as a stress hormone, it clearly has an anti-metabolic effect in its role in up-regulating the stress response.

Instead of looking at nutrition in an allopathic way (i.e. the effect of nutrition on certain diseases), it is often better to look at nutrition from a functional perspective. When we do this, we realize that PUFA clearly downregulates metabolism, increases the stress response, blocks thyroid, interferes with blood sugar and insulin sensitivity, and has actually been shown to increase cancer metabolism. Additionally, the evidence that saturated fat is harmful is weak and has been taken out of context.

In nutritional biochemistry, the Randle Cycle (aka the glucose-fatty acid cycle) describes the relationship between substrates of metabolism. Specifically, it describes the idea the glucose and fatty acids compete as the primary metabolic substrate. From a biochemical point of view glucose is intended to be the primary metabolic fuel; however, when there is a high amount of PUFA in the system it competes with glucose and blocks glucose oxidation. The body interprets a high PUFA state as starvation, and the Randle Cycle is a regulatory metabolic process that allows for fuel optimization in this condition (see The glucose-fatty acid cycle: a physiological perspective). 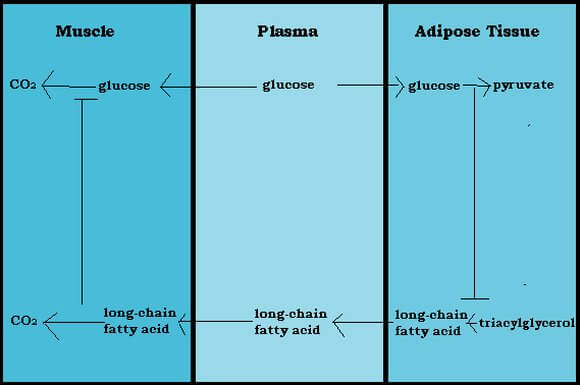 The medical literature is clear that PUFA has an anti-metabolic effect on human physiology. See How to Heal Your Metabolism for a complete discussion of the role of metabolism on health from a functional perspective. A study in 2004 by Diniz et al looked at rats fed a diet high in saturated fat vs unsaturated fat, and found that although the PUFA-fed rats had lower serum cholesterol levels, they had higher levels of oxidative stress and metabolism was shifted away from aerobic respiration into fermentative glycolysis (Diets rich in saturated and polyunsaturated fatty acids: metabolic shifting and cardiac health). Rafael et al showed that rats who were fed a PUFA-deficient diet had a higher metabolism as measured by the rate of oxidative phosphorylation (The effect of essential fatty acid deficiency on basal respiration and function of liver mitochondria in rats).

Another mechanism behind how PUFA downregulates metabolism includes blocking of thyroid at the receptor level. Thyroid is the way the body regulates metabolism amongst all the different cells of the body. Wiersinga et al showed that PUFA blocks the binding of active thyroid hormone (T3) to its intracellular receptor (Inhibition of nuclear T3 binding by fatty acids).

A controlled clinical trial by Pearce et al looked at 846 men randomly assigned to a high-PUFA, low-saturated fat diet or a conventional diet showed that although fatal cardiovascular events were reduced in the high-PUFA group, rates of cancer in this group were increased making the total mortality approximately the same in the 2 groups (Incidence of Cancer in Men on a Diet High in Polyunsaturated Fat). Studies have also shown the connection of PUFA (specifically omega-6) to breast and colorectal cancer (Dietary polyunsaturated fatty acids and cancers of the breast and colorectum: emerging evidence for their role as risk modifiers).

The American Heart Association and American College of Cardiology recommendation limitation of saturated fat. This recommendation is based on studies that show that limitation of saturated fat lowers LDL cholesterol, which is a risk factor for cardiovascular disease. However, there are no studies directly linking saturated fat to cardiovascular disease, and in fact, recent meta-analyses (combination of studies) have shown that there is no association (Association of dietary, circulating, and supplement fatty acids with coronary risk: a systematic review and meta-analysis). Saturated fat should not be consumed in excess; however, saturated fat in moderation (butter, yogurt, cheese, grass-fed meat, coconut oil, etc) likely has a variety of health benefits, including regulation of the immune system, digestive system, hormonal system, improves bone health, and likely helps protect the metabolism against unsaturated fat.

For the reasons stated above, we advise most people to limit their consumption of polyunsaturated fats, which include: 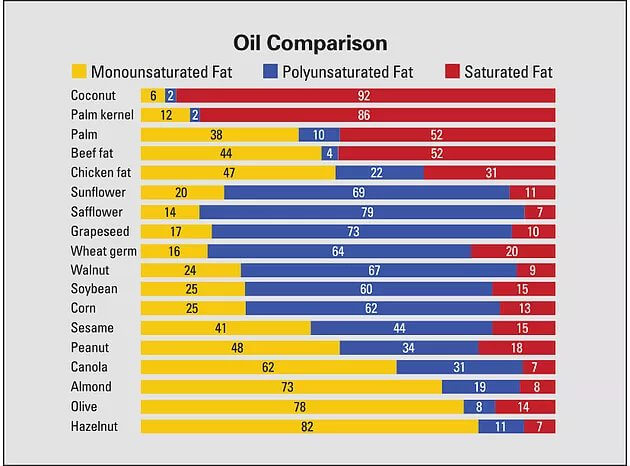 For a more individualized analysis of your health and biochemical situation, please contact a local Functional Medicine provider in your area.

The Dangers of Fat Metabolism and PUFA