Imbalanced Neurotransmitter Levels and Their Impact on Health

Neurotransmitters are the chemical messengers that our nervous system uses to relay information in between neurons.

The way different parts of the brain communicate as well as how it processes stimuli from the outside world, depend on the body’s ability to synthesize and process these neurotransmitters.

Optimal neurotransmitter balance is required to maintain proper health. Imbalances can cause the brain and the body to be over- or under-stimulated, producing neurological or psychological symptoms.

Like hormones, neurotransmitters require a delicate balance to keep the body functioning at a peak level.

Genetics, environment, chemicals and nutritional deficiencies are a few factors that can result in over- or under-production of neurotransmitters. Once out of balance, the nervous system begins to compensate – which, in time, can lead to neurological or psychological symptoms.

Some of the more common psychological conditions today are known to be accompanied by neurotransmitter imbalances. However, it’s also possible for individuals to present with similar symptoms yet have unique foundational imbalances. Testing helps clarify these root issues. 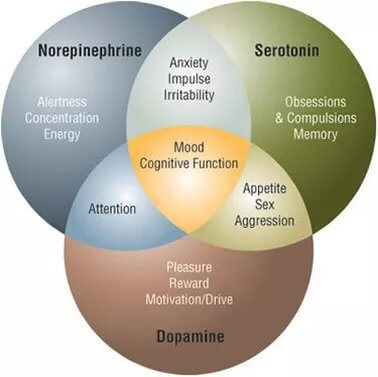 Glutamate: functions as the “on” switch in the brain. It’s the major excitatory neurotransmitter that decreases sleep, optimizes learning, memory and mood and improves libido.

Histamine: plays a role in the body as a neurotransmitter that increases metabolism, promotes wakefulness and suppresses appetite.

GABA: functions as the “off” switch in the brain. It’s the major inhibitory neurotransmitter that improves mood, relieves anxiety and promotes sleep.

Glycine: plays a dual role as a neurotransmitter and amino acid that serves as a building block to

Serotonin: generally regarded as the “happiness molecule,” contributes to the feeling of calm and

Fatigue: An imbalance between excitatory and inhibitory neurotransmitters is likely.

PMS or PMDD: Imbalances such as Serotonin, Dopamine, Norepinephrine and GABA are often involved.

Addictions and Cravings: Often associated with Dopamine and Serotonin deficiency 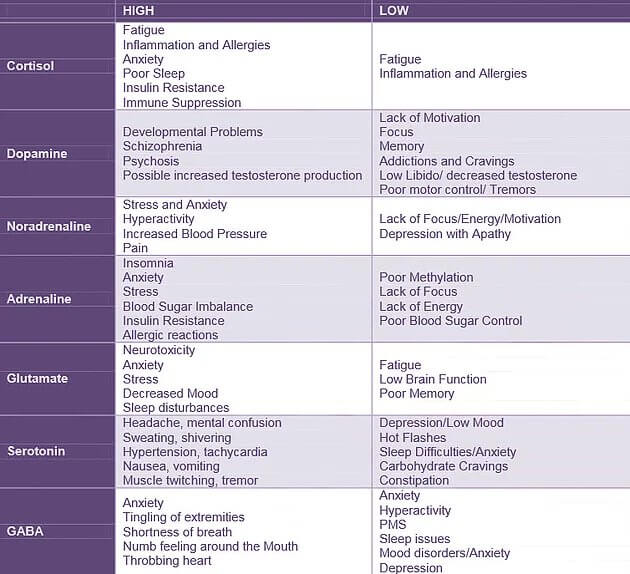 Below is her urinary neurotransmitter test results (ZRT Laboratory): 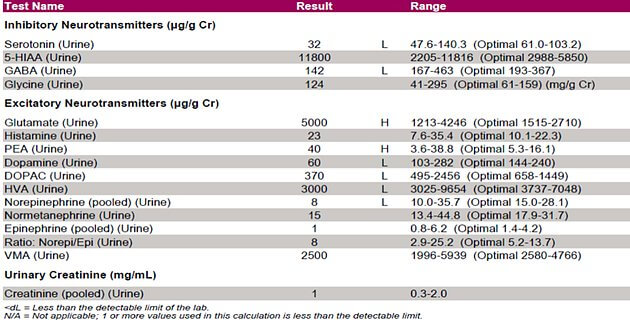 3. Low levels of Dopamine and Catecholamines

With the help of her Functional Medicine practitioner, Alicia then begins her treatment protocol, which involves lifestyle modification, nutritional modification, and nutraceutical supplementation to help balance her neurotransmitter levels.