Firstly, methylation is involved in the synthesis of the following molecules:

– Carnitine: involved in utilization of fat into cellular energy

Secondly, methylation is involved in the regulation of sulfation, which is needed to produce glutathione, the body’s master detoxifier. Thus, a methylation problem may result in the body’s ability to detoxify hormones, chemicals, and heavy metals.

Thirdly, methylation is utilized in the control of replication of DNA when individual cells need to divide. This why methylation problems are involved in the pathogenesis of cancer, because the body’s ability to control cell growth is impaired. Methylation is also involved with gene expression of DNA. This is an example of epigenetics, how the environment and nutrition affects the expression of genes.

The Nutritional Factors that Affect Methylation: 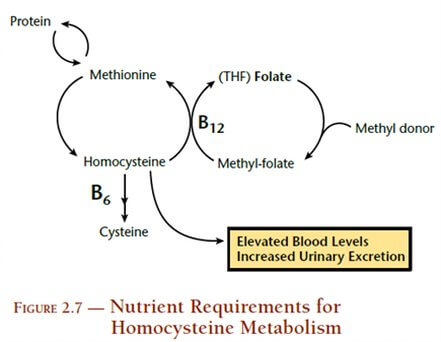 Additionally, some patients have a defect in their MTHFR gene, which converts Folate into Methylfolate. People with this mutation are predisposed to have methylation issues even if they have plenty of Folate.

Because of the prevalence of methylation issues and the variability of biochemcial consequences, we routinely test patient’s methylation capacity in our routine bloodwork. Testing your methylation may include tests as Folate, Vitamin B12, and Homocysteine (a functional marker of methylation) amongst others.