The thyroid gland, which is located in the front of the neck, is the master control for the rate of the body’s metabolism. Symptoms of hypothyroidism include weight gain, fatigue, cold intolerance, constipation, dry skin and brittle nails.

In conventional/allopathic medicine, hypothyroidism is a discrete disease entity. In other words, you either have hypothyroidism or you don’t. The diagnosis is made only if the Thyroid Stimulating Hormone (TSH) is elevated and the Free T4 is low. In most laboratories, the upper limit of normal for TSH is set around 4 or 5.

Functional medicine; however, understands that the function of the thyroid gland exists on a spectrum. In other words, there are patients whose thyroid function has not deteriorated to the point where their TSH is above 4, but it is not functioning optimally… it is somewhere in the middle. This situation demonstrates the difference between “normal” (which conventional medicine usually defines as the middle 95% of the population) and “optimal” which refers to function.

How to Measure Thyroid Function

Thyroid Stimulating Hormone (TSH). This is the hormone that is released by the pituitary that signals to the thyroid gland to secrete thyroid hormone. A high TSH is a marker that one is hypothyroid, because if there is not enough thyroid in the system, then a negative feedback loop will cause the pituitary to make more TSH to stimulate more thyroid hormone. A person with an optimally function thyroid gland will usually have a TSH around 1.3 to 1.8.

Free T3 (FT3). While FT4 is the most abundant thyroid hormone, FT3 is the most biologically active thyroid hormone. Thus it is actually more important from a functional perspective than the FT4. T4 is converted into T3 by an enzyme called deiodinase. If the FT4 level is normal, but the FT3 level is low, there may be an issue with this enzyme and the body’s ability to convert T4 to T3. An optimal FT3 is around 3.2 to 4.9.

Reverse T3 (RT3). T4 not only gets converted into T3, but some is also converted into Reverse T3. This can be though of as “anti-thyroid hormone”. Reverse T3 binds to the thyroid receptor and blocks it instead of activating it. This mechanism is put in place by our body because in times of stress and inflammation, it is adaptive to reduce the metabolic rate. Thus patients with an elevated Reverse T3 will likely have functional hypothyroidism, even if the other data is normal. An optimal RT3 is less than 14.

Thyroid Antibodies. The presence of thyroid antibodies in the blood means that immune system has begun attacking the thyroid gland, a situation known as auto-immunity. Those with auto-immune thyroiditis often have decreased thyroid function. It is important to also address the underlying immune system dysfunction as well.

Thyroid Nodules. The presence of thyroid nodules is also a sign that the thyroid is inflamed and may not be functioning properly. 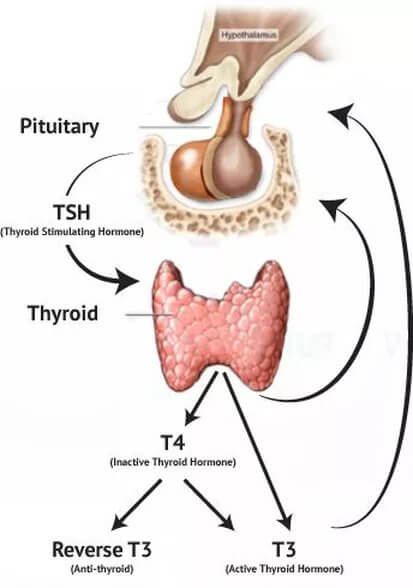 Having a complete picture is important in order to properly assess thyroid function. In addition to taking a comprehensive approach to your thyroid function, your Functional Medicine practitioner will likely integrate your thyroid health into your overall treatment plan, as thyroid health is related to nutrition, gastrointestinal health, adrenal function, detoxification function, inflammation and immune system function.